Housing First - Where is the evidence?

Despite new federal and provincial government initiatives to assist with housing, in the last ten years the number of homeless persons continues to increase. With this increase a sizable number of sub-populations have emerged: families with children, people with mental illnesses, those with a primary substance use issue, immigrants and refugees, youth and seniors. The premise that most homeless people are without housing because of functional skill deficits grew out of historical impressions that hobos of the Great Depression were all alcoholics and those thereafter came from the mental illness deinstitutionalization movement of the 1960s and 1970s. The ongoing move to community treatment saw many persons who had become reliant on the care of others thrust into the community without the financial and ancillary supports required for housing stability (Metraux, et al., 2010).

Because of the high prevalence of mental health and substance use issues in the homeless population (sometimes a cause of homelessness, but often a consequence of life on the streets), in the last twenty-five years, in most instances programs for people who are homeless modeled their re-housing programs after the format used for those with mental illness and addictions issues. The result was a “treatment before housing” approach across the spectrum of homeless service providers. In other words, people need to resolve their mental health and/or addictions issues before they can be ready for housing.

In the last ten years a radical transformation has occurred in the attitudes and practices guiding housing programs that provide emergency and long-term housing for homeless people. This shift evolved from linear or step-wise models of either coupling housing with treatment, or of requiring treatment prior to obtaining permanent housing (Treatment Continuum – TC) (Padgett, et al., 2006), to a priority placed on housing without treatment expectations (Brown, 2005). The latter approach has been labelled housing first (HF) and has rapidly acquired wide-spread adoption by communities with 10-year plans to end homelessness in Canada and the U.S. (e.g. Calgary, Toronto, Minneapolis, San Diego, New York) and by mental health service providers seeking housing stability for clients (Newman & Goldman, 2008).

Fuelled by some scientific evidence (Atherton & McNaughton Nicholls, 2008), and increasingly made popular by press and housing authorities developing “10 year plans” to eradicate homelessness, housing first has emerged as an increasingly popular approach to addressing homelessness. (The HF approach was embraced by all levels of government in Canada, as evidenced by the Streets to Homes initiative in Toronto and the housing initiatives in Calgary). Despite the rapid uptake of this approach, there is the absence of “best practice” evidence to support this. “Best practice” is commonly understood to imply evidence-based techniques or interventions that have been demonstrated to work well with most persons and have the least potential for adverse results. To the extent that there was some, but not conclusive, evidence that HF was effective for those with mental illness and co-occurring mental illness, the Mental Health Commission of Canada (Mental Health Commission of Canada, 2010), introduced a large, multi-site study of HF in five Canadian cities (referred to as the At Home/Chez Soi project). This project is examining the approach in various political contexts and with differing target populations, thereby including the multi-cultural dimensions essential to Canadian adoption of this approach. Although early results are promising, conclusive answers will not be available for several years. In the interim, adoption of the HF approach is rapidly growing.

Speedy implementation of a new initiative is often fraught with issues of fidelity in replicating the model program in other locations (McGrew, et al., 1994). Our search uncovered three founding programs that can be considered housing first models. Because of their differences, we begin this review with a brief description of each and then turn our attention to the evidence base for housing first as reported in the academic literature. Because of the limited documentation of this approach, we will further the understanding of housing first by reviewing government documents and reports that provide an insight on this evolution and its current public acceptance. Finally, we critically examine the assumptions and gaps in the literature that require further evidence-based data. 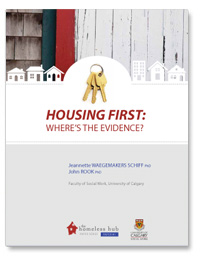